Congratulations to all those honoured in the Queen’s New Year 2022 Honours list.
Published 14 January 2022 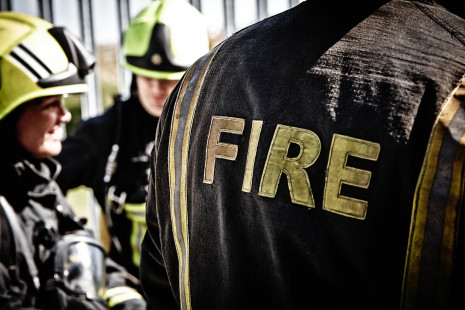 We would like to offer our sincere congratulations to all those honoured in the Queen’s New Year 2022 Honours list. It goes without saying, we are  proud of staff across fire and rescue services for their outstanding dedication and commitment to the people they serve.

The list below highlights people from fire and rescue services who received a New Year’s Honour.

Sally Angeline HAMMOND, Group Manager, Suffolk Fire and Rescue Service. Station Manager, Suffolk Fire and Rescue Service. For Services to the communities of Suffolk, charities and women in the fire and rescue service.  In 2017/18 she, with a fellow female firefighter, was the driving force behind the establishment of the Suffolk Women in Fire Together network.

Justin JOHNSTON, Chief Fire Officer, Lancashire Fire and Rescue Service. He has been at the forefront of innovation and health and wellbeing initiatives in the fire and rescue services sector over the last 10 years. Outside of his role as Lancashire Fire and Rescue Service’s Chief Fire Officer, Justin has volunteered his time to become the National Fire Chief Council’s lead for drones, firefit and health and wellbeing.

Nicholas SEARLE, Deputy Chief Fire Officer, Merseyside Fire and Rescue Service. For distinguished service.  His influence on National Resilience began at its inception in 2004 as one of the original members of Merseyside Fire and Rescue Service’s Urban Search and Rescue Team; the first of its kind in the UK. He was pivotal in the initial training, development and subsequent embedding of the team in to MFRS’ operational resources which remains as one of the flagship national USAR resources.

Rabinder Singh DHAMI Prevention Manager, Shropshire Fire and Rescue Service. For services to Fire and Rescue.  His promotion to Prevention Manager in 2009 enabled him to pioneer unique initiatives to help deliver the Department’s objectives. An outstanding example is his innovative secondment to Telford & Wrekin Council in 2016 during which he established effective partnership working with various departments including adult social care.

Alan GIBSON Fundraiser, Fire Fighters Charity. For services to Charity and to the community in County Durham.  After retirement he has remained working as a pivotal volunteer fundraiser and community advocate for the benefit of the fire service in County Durham and Darlington. He has never forgotten his fire service background and he has dedicated a major amount of his life (professionally in the past and now as a volunteer) to working for the Fire-fighters’ Charity which supports operational fire-fighters and their families.

Rebecca Jayne JEFFERIES Head, Human Resources and Learning and Development, Royal Berkshire Fire and Rescue Service. For services to furthering understanding and support for improving physical and mental health.  Her passion and energy has created an environment where mental health is openly discussed without stigma. At no time has the mental, physical and financial welfare of staff been more at risk than during Covid-19.

Lindsay SIELSKI Crew Manager, Lancashire Fire and Rescue Service. For services to working within the Response and Emergency Planning department at Lancashire Fire and Rescue Service (LFRS). Her work has provided innovative and safer ways of working by introducing fire dogs.  Around 942 high risk people go missing in Lancashire each year and she saw that dogs would be advantageous in helping to find them quickly. She put forward the business case to use the dogs, and put together risk assessments and polices.

John Craig WALL Group Manager, Cumbria Fire and Rescue Service. He has been a dedicated fundraiser for The Fire Fighters Charity since 1999, raising several hundreds of thousands of pounds and provided direct support to beneficiaries and their families. John works tirelessly for the Charity both visibly and behind the scenes. He joined Cumbria Fire and Rescue Service in August 1998, having previously worked for Cumbria Constabulary as an armed response police officer for 7 years. Since joining the Service he has worked in a number of areas and progressed through the ranks to Group Manager.

If you know of anyone worthy of an Honours award please email Anne Floris (email: FireServiceHonours@homeoffice.gov.uk) for further information.